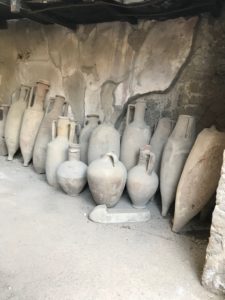 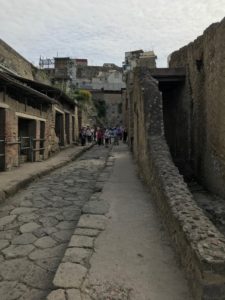 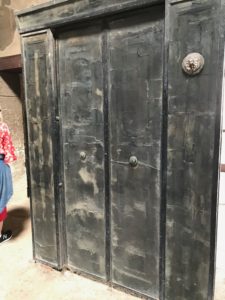 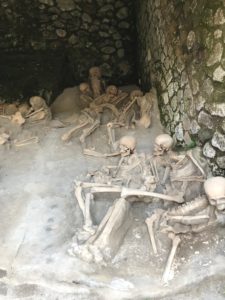 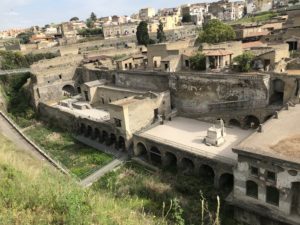 Everyone’s heard of Pompeii. But did you know about Herculaneum?

At precisely one in the afternoon on August 24, 79 A.D., near present-day Naples, Italy, Mount Vesuvius erupted with a fury that blew two-thirds of the mountain away. Strong winds carried massive clouds of volcanic ash and smoke within minutes to the thriving commercial port of Pompeii ten kilometers to the south. Thirty feet of blistering hot ash blanketed the city, burning everything and incinerating twenty thousand citizens instantly.

Today tourists can walk Pompeii’s ancient streets, see plaster casts of bodies of humans and animals clearly writhing in the agony of death by suffocation and fire, and marvel at the sheer size of this prosperous city. The ruins seem to go on forever, and the site can take a full day to see if one has the time.

There’s an alternative called Herculaneum (Ercolano in Italian). This city on the Bay of Naples was much closer to Vesuvius – only seven kilometers to the west – and it was quickly covered with ninety feet of mud.

Herculaneum’s population of four thousand made it much smaller than Pompeii, but it was a wealthy seaside community of merchants and boat captains. The city had a gorgeous view of the sea and it would have been an upscale, thriving place with lots of activity.

Mud versus ash – the type of material that covered the two cities made all the difference in what was preserved beneath. Pompeii was literally decimated by fire. Everything made of wood – lintels, braces for the upper floors of houses and shops, carts and carriages – was incinerated in seconds. Every living thing was too, although the molten ash molded around their twisted bodies and created empty pockets. Thousands of years later, archaeologists would fill those cavities with plaster and discover exactly what people and their animals endured. The preservation was so perfect that a studded collar and chain can clearly be seen on a dog grimacing in the throes of death.

That was the effect of molten ash, but at Herculaneum things were totally different. A vast sea of mud rushed down the hill at four hundred miles an hour. Residents of the town who had just seen the volcano erupt had only minutes to escape the river roaring toward them. Three hundred skeletons have been unearthed, huddled together at the water’s edge. These were citizens who tried to run away but had nowhere to go.

The town itself is well preserved. Nothing burned; there are intact upper floors, wooden stairways and lintels, utensils and equipment that allow today’s visitors to observe life in the first century. The area of the ruins is small – only half has been excavated, and we are told that the other half will remain underground for eternity. That’s because the first digs at Herculaneum began in 1738 and continued until 1875. Then the work stopped for fifty years. When that happened, modern buildings were built on what were empty fields, and the remainder of the ancient city now lies ninety feet below houses, restaurants, office buildings and modern streets.

If you are passing through Naples on the way to the Amalfi Coast or Sorrento, the site of Herculaneum is only twenty minutes off the main highway. It’ll take a couple of hours to see, and it’s a diversion well worth the trip.